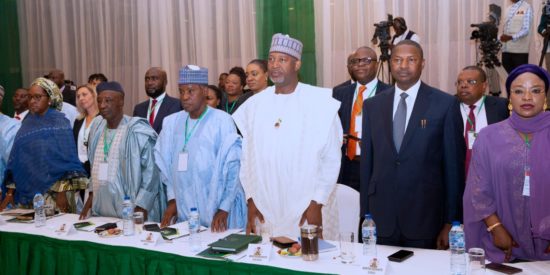 Thirteen of Nigeria’s current 44 ministers graduated from the Ahmadu Bello University, an extensive review of their official resumes have shown.

A PREMIUM TIMES’ review of the details further shows that all the 13 obtained only their first degrees from the 58-year-old institution formerly named the University of Northern Nigeria.

The only exemption is the Minister of the Federal Capital Territory, Muhammad Bello, who bagged both a bachelor’s and master’s degree in business administration from the university, in 1980 and 1987 respectively, after which he graduated from the International University of Africa, Sudan, in 1994. 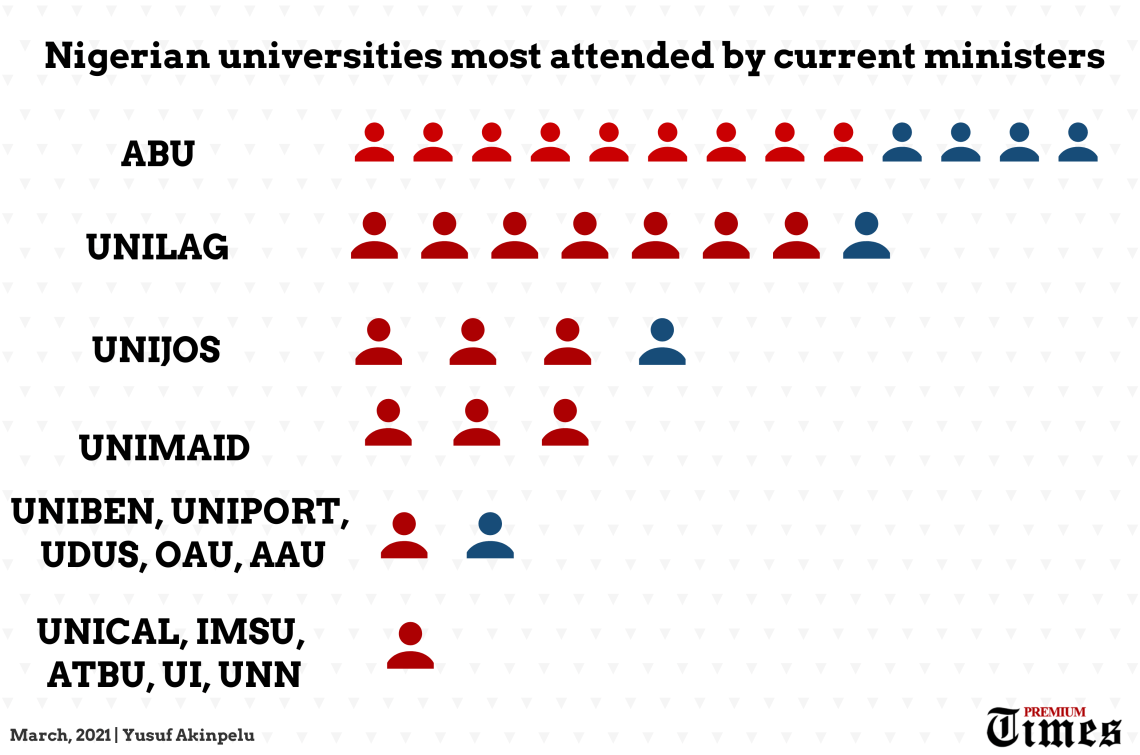 The Minister of State for Environment, Sharon Ikpeazu, on her part, went to ABU for IJMB in 1981.

Nuhu Ibrahim, Ahmadu Bello University’s best graduating student in 2018 and overall best valedictorian (4.94 CGPA) in the 58 years history of the university, said this could be because of ABU’s long heritage and prestige. Mr Ibrahim is now studying for masters in artificial intelligence at the University of Manchester.

“The universities are super old and you would expect that they will have grown up past students,” Mr Ibrahim said over the telephone.

“I won’t also deny the fact that graduating from some particular universities has a little impact on the networking factor which has a further impact on overall success,” he added.

Choice universities
University of Lagos placed second, with eight of the nation’s current ministers having obtained at least a degree from the university. Three of them had their formative educational qualification from the university, while the other five enrolled in the school for further studies.

Four other ministers attended the University of Jos, but only women affairs minister, Paulen Tallen, had her first degree, in sociology from the school after which she graduated from the John Kennedy School of Government in 2002. Emeka Nwajiuba, the minister of state for education, has a law PhD degree in view from the university.

Likewise, the University of Maiduguri has three alumni among the ministers.

Although Mr Magashi would later obtain an advanced diploma in public administration at Ahmadu Bello University before studying law at the same university in 1983, Mr Buhari pursued his military career by attending Mons Officer Cadet School, Aldershot, UK, where he graduated from in January 1963.

Foreign trained]
While 18 of the ministers bagged various degrees from foreign institutions, four of them had their formative higher educational degrees from institutions outside the shores of Nigeria.

Of the quartet, state transportation minister, Gbemisola Saraki, who holds a bachelor’s degree in economics from the University of Sussex Falmer in 1987, had all her education outside Nigeria.

For health minister, Osagie Ehanire, after completing his primary school education in Benin and secondary school in Ibadan, he proceeded to Ludwig-Maximillian Universität München, Germany, to study medicine, and then to the Royal College of Surgeon, Ireland, where he bagged a diploma in anaesthetics.

Environment minister Muhammad Mahmood, earned respective bachelor and master’s degrees in microbiology in 1983 and resources management in 1985 from Central Washington University. In 1990, he bagged a PhD in watershed management from the University of Arizona.

Foreign minister Geoffrey Onyeama earned two bachelor’s and master’s degrees, both in political science and law. He obtained them from Columbia University, Cambridge University, and the University of London, where he got his second masters honour.

Other institutions
A member of the Chartered Institute of Certified Accountants, England, the Niger Delta minister for state, Tayo Alasoadura, earned varying accounting honours from Nigeria.

Interior minister Rauf Aregbesola had his ordinary and higher diplomas from The Polytechnic, Ibadan. Power minister Sale Mamman finished from Kaduna Polytechnic in 1988 before proceeding to the Federal Polytechnic, Mubi, to study electrical engineering in 1991. He would later earn a master’s in human relations from Bayero University, Kano.

The state minister for mines and steel, Ikechukwu Ogah, attended the Institute of Management Technology, Enugu, while aviation minister Hadi Sirika had stints in the College of Arts and Tech and the Nigeria Civil Aviation Training Centre, both in Zaria.

Alumni funds amidst funding shortfall
Despite having a rich alumni base, most Nigerian public institutions still grapple with a myriad of challenges, with arguably the most serious being poor funding.

This year, the federal government will again fail to fulfil its financial obligations as allocation to education is the lowest in 10 years, when measured as a percentage of the total budget.

The dip in the funding for the nation’s federal institutions (whose tuition fees and staff salaries are heavily subsidized) has contributed to the deplorable state of infrastructure in the schools and the incessant faceoff between the government and the institutions’ labour unions.

In one of her articles, Ngozi Edeagu, a professor of history, suggested that Nigerian universities need alternative income sources, like contributions by alumni, to boost their internally-generated revenues.

“It is no longer reasonable for alumni of the public universities in Nigeria to believe that the Nigerian government is financially capable of funding all aspects of higher education from paying staff salaries to heavily subsidizing student fees just because the institutions are publicly funded,” she wrote.

For instance, alumni donations to U.S. colleges totalled over $11 billion in 2019, according to a 2020 research by the Council for Advancement and Support of Education.

The average alumni giving rate of the 1,451 ranked colleges in the U.S. during the 2018 and 2019 sessions was eight per cent, according to the data, and some schools raked in an average of about 55 per cent alumni giving rate.

Likewise, through its Oxford Thinking Campaign, which ran from 2004 to 2019, where alumni were encouraged to make donations through post, phone, wills, stocks and shares, the University of Oxford was able to raise £3.3 billion.

This explains why UK-based Bath University, and Harvard University in the U.S. have designated portals where alumni can give back to their schools.

Although the University of Lagos has an alumni giving portal, the contact number provided for enquiry “does not exist” when it was dialed.

The Ahmadu Bello University has arguably the most structured alumni donation portal among the universities checked.

Ms Edeagu argued that poor record keeping by, and online presence of Nigerian institutions as well as unsatisfactory student experience and weak learning environments are limitations institutions must address to get their alumni on their sides.

“I believe public universities in Nigeria can considerably increase their funding through their alumni. Nigeria has the power of numbers to accomplish this feat. Let’s first find them, engage them, then unleash the financial floodgates,” Ms Edeagu wrote in her article.