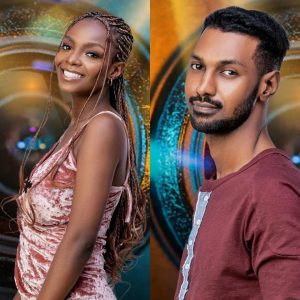 Peace has emerged as the first Head of House for the Big Brother Naija Shine Ya Eye season.
She was made the HOH after winning the Head of House games on Monday evening.
With this new position, she gets to stay in the Head of House room, and choose a deputy to assist her in her roles.
She went ahead to pick Yousef as the deputy head of the house.
Peace and Yousef won’t be up for eviction this week and they will be able to enjoy the exclusive right to the HOH lounge.
The 22 housemates were called into the Arena to compete in a dice game that is similar to that of last season with some changes to the game. And YES! It was just as frustrating for the housemates as it was initially last season.
The game that is just like Snake and Ladder with some tweaks had the housemates blowing ballons if they get a wrong number from a dice throw and if they are not on the right path, they sometimes need to hop or touch all their major joints for them to continue.
The housemates were called one after the other and these are their scores:
Yerins = 4
Nini = 6
Saga = 0
Princess = 6
Cross = 4
Maria = 15
Boma = 5
Peace = 16
Yousef = 9
Beatrice = 6
Niyi = 8
Angel = 0
Pere = 13
Tega = 8
Jaypaul = 10
Arin = 9
White Money = 10
Saskay = 4
Emmanuel = 0
Liquorose = 0
Sammie = 0
Jackie B = 8