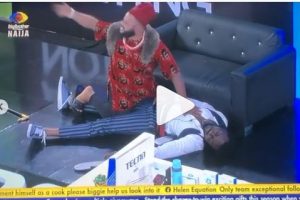 Two of Bbnaija season 6 most talked-about , White money and Pere starred in a Drama presentation which was sponsored by Tecno Mobile, the drama tells what goes on in today’s society and the trauma parent whose children are drug addicts face.

In this drama which Team Xclusive (Whitemoney, Pere, and Liquorose) dramatized, Pere who is Whitemoney’s son and Liquorose’s as his Mum, In this drama Pere just returned from abroad and the family was happy to accept him but later sniffed some dosage of cocaine, which later lead to his sudden coma, from an overdose of hard drugs.

Unfortunately, team Xclusive couldn’t finish their presentation, This is the second part of the techno task and Biggy told them to act a play not more than 7 minutes and the stage play should address and proffer solutions to gender equality, domestic violence, and child education.