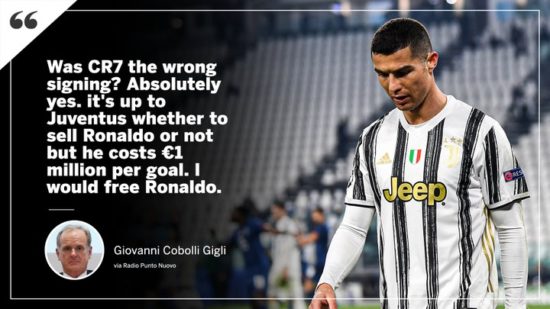 Former Juventus president Giovanni Cobolli Gigli has said the club should look to offload Cristiano Ronaldo at the end of the season after they were knocked out of the Champions League at the round-of-16 stage for a second straight year.

Juve signed Ronaldo from Real Madrid in the summer of 2018 with the expectation that the Portugal captain would lead them to glory in Europe’s elite club competition for the first time since 1996.

Ronaldo has scored 27 goals in 32 appearances in all competitions for Juve this season but failed to find the back of the net in both Champions League encounters against FC Porto, who progressed to the quarterfinals on Tuesday. 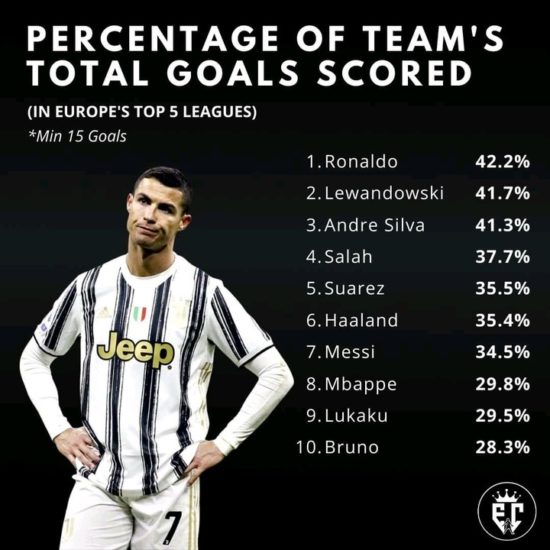 “Was CR7 [Cristiano Ronaldo] the wrong signing? Absolutely yes,” Cobolli Gigli, who was Juventus president from 2006 until 2009, told a radio station.

“I said that on the very first day, showing that I have respect for a great champion. But he is too expensive … it’s up to Juventus whether to sell Ronaldo or not, but he costs €1 million per goal. Juve president [Andrea] Agnelli must be self-critical, but he doesn’t have great collaborators.

“Juventus has a need to rebuild. I would free Ronaldo but also [Juventus sporting director Fabio] Paratici.”

Ronaldo was in the wall, but he jumped and turned around with the ball going under him and beating Juve goalkeeper Wojciech Szczesny. Juve went out on away goals after a 4-4 aggregate result.

Juventus sporting director Paratici said prior to Tuesday’s encounter that Ronaldo’s contract extension is not on the club’s agenda at the moment. The forward’s deal runs out in June 2022.

Paratici also said Ronaldo will be the one to make the decision on whether he continues or not.

“Cristiano has his career in his hands,” he said. “Always with these great players you know that when they decide to end their experience with one team and move on to another experience, it’s they who decide, and you have to respect that decision. We have to consider how he will feel in order to continue or not once his contract expires.”