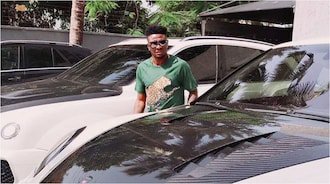 Former Super Eagles captain Mikel Obi has been named the richest Nigerian footballer at the moment with a net worth of about ₦23 billion.

The 33-year-old who currently plays for English club Stoke City made most of his fortunes from football during his stint at Premier League club Chelsea.

Chelsea were granted a work permit for the midfielder after they completed the £16 million signing in June 2006 where he made 249 league appearances and getting a goal before he moved to Chinese club Tianjin TEDA in 2017.

Also on the list of richest Nigerian footballers currently is ₦14 billion worth Obafemi Martins who takes second position.

The 36-year-old currently plays for Chinese club Wuhan Zall as a striker and has so far scored one league goal since joining last year.

According to BBC Pidgin, the striker is worth over $25 million with houses in both Lagos and Italy where he spent a major part of his playing career.

Odion Ighalo is third on the list, with the former Shanghai Shenhua striker having a net worth of ₦12 billion.

The former Manchester United striker currently plays for Al Shabab of Saudi Arabia where he has scored 3 goals in 5 matches since he joined earlier this year.

Below are the top 10 richest Nigerian footballers in 2021 according to clacified.com