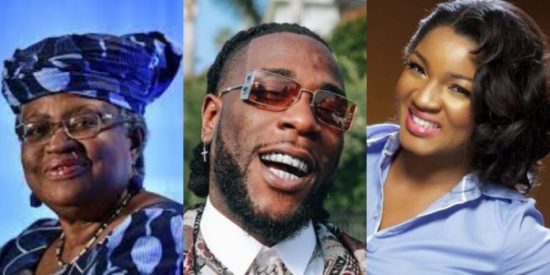 The Director General of the World Trade Organization, Dr Ngozi Okonjo-Iweala, Omotola Ekeinde, Burna Boy, were among those who made the Forbes Africa’s “100 Innovations, Inventions and Icons from Africa list.”

The globali media company and American business magazine, Forbes also named Chimamanda Adichie, Davido, Wizkid, Olugbenga Agboola, and Mr Eazi, among those that made the list.

Forbes focuses most times on listing and ranking on areas like business, investing, technology, entrepreneurship, leadership and marketing.

The magazine on its official Twitter account @Forbesafrica said the recently recognized 100 innovations, inventions and icons across various industries was a way of celebrating the creativity of the African mind.

“This also include the award-winning ideas that had defined the African continent and influential role models that have spelt Africa’s growth over the last decade.

Reacting on the inclusion, Ekeinde took to her official Twitter account @Realomosexy on Tuesday to expressed gratitude to the Forbes.

She wrote, “Thanks @Forbesafrica for the inclusion in the 100th issue of Africa’s icon personalities.

Okonjo-Iweala is a Nigerian-American economist and international development expert who has served since March as Director-General of WTO and the first woman and the first African to hold the office.