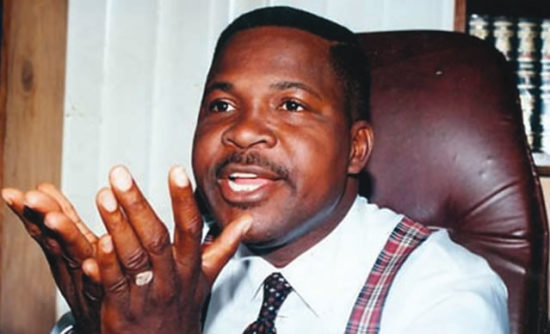 Human rights lawyer, Mike Ozekhome (SAN), says the Minister of Communications and Digital Economy, Isa Pantami, is unfit to oversee critical digital and telecommunications agencies of government because “his antecedents are quite worrisome”.

Ozekhome, in a statement on Thursday titled, ‘Isa Patami: The Leopard And Its Unchanging Spots’, said though the communications minister recently renounced his radical pro-Taliban comments, he hasn’t really changed as a “fanatic, fundamentalist and supporter of extremist Islamic sects”.

“Has he really changed? What has changed? Can a leopard ever change its spots? Ozekhome asked.

He said, “In saner climes, Pantami should have resigned immediately without more. Or be sacked forthwith. Lifting the veil off his purported transformation or assumed transfiguration is so easy when viewed against the background of his new acts even as Minister.

“The ceremony was not covered by AIT, Channels, NTA, TVC, ITV, or even FM Youtube channels. Rather, a very little-known Islamic TV channel called Al-Afrikiy was contracted to relay an event organized by a whole Federal Government of Nigeria. It must be borne in mind that Al-Afrikiy is not merely an Islamic-influenced learning TV station, it is also an Islam-only TV channel. It broadcasts strictly religious matters.”

The lawyer also wondered how the President, Major General Muhammadu Buhari (retd.), nominated Pantami as minister in 2019 without considering his past pro-Taliban stance.

“By the way, where was the DSS (Department of State Services ) which was supposed to screen Pantami before his name was sent to the Senate? Why did it turn its focus away from these destructive extremist views of the very Minister in charge of Nigerians’ information data, with unabridged access to same, including NIM, BVN, biodatas, etc?

“What about our fawning rubber stamp “take-a-bow” Senate that was supposed to do a very thorough screening of Pantami? Why did it simply allow the Carmel to pass through the needle’s eye? When will it winnow out the chaff from the real wheat? Why has it turned a sacred duty on behalf of Nigerians into a “yes sir” party affair, which suggests that President Buhari can do no wrong, or make any mistake?” he queried.

“Isa Pantami should resign, as Mrs Kemi Adeosun, former Finance Minister, once did. Where he fails to do this, Buhari should immediately relieve him of his ministerial position. His antecedents loudly proclaim him as a clear and present danger to Nigeria’s asphyxiatingly fragile unity, harmony and religious and ethnic tolerance,” Ozekhome concluded.