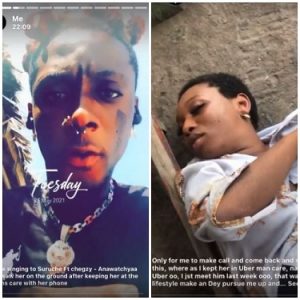 Sometimes we have to be careful with the type of lady we hang out with because many of them are evil and can lead one to jail for knowing nothing about them.

This incident happened to versatile entertainer and singer Suruche, popularly known as the number one in Africa as he narrowly escaped being trapped in a crime that he knew nothing about.

However, Suruche narrated the incident where the lady asked him to take her along on a cruise and be with him in his events movement as some of his music business partners were trying to book him for a show.

Luckily, Suruche had her along with him on the tour trips, and in the course of the journey, he left her and kept her and her phone in the care of the uber driver.

The next day, the same uber driver which Suruche had chartered privately for all his movement around town started accusing him of what he was not aware of.

He said they found a bottled substance like a hard drug in the care of the lady and she was in a coma.

Suruche was later apprehended by the police force and also the Uber driver as well, and the driver started contradicting himself, lying and dropping all the issues at hand about the girl in a coma on Suruche.

He made claims that the stuff or bottle substance found in the car was used to drug her before leaving her in his care.

Suruche denied all accusations and had to show the policemen all the payment receipts he had made to the same driver, as well as encouraging and patronizing on charter trips away whenever he needed an urgent ride.

Through the intervention of our capable Police Officer, who is hardworking and was able to detect that the Uber driver was a liar and that the lady involved had not died from a drug overdose.

Finally, the young lady’s iPhone was later found in the car and Suruche had to prove with evidence in the video that the lady was alive and even had to call her his wife so as to save her from being seen as a one-night stand.

The moral of this story is that one should be careful of things and people that can implicate you at any moment in life.