Home » Yoruba groups in diaspora meet over separation from Nigeria 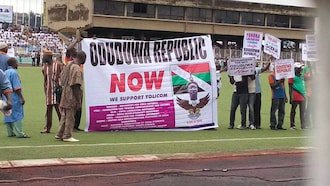 The coalition of over 174 Yoruba groups in the diaspora, under the auspices of Yoruba One Voice (YOV) met at an International Webinar Conference held on Saturday, March, 27.

The meeting had in attendance over 1000 prominent Yoruba sons and daughters.

In a statement made available to Legit.ng, the YOV said it is committed to the actualisation of Oodua Republic.

Also, it said it had resolved to pursue vigorously the struggle for self-determination considering the long years of misrule, nepotism and failure of the federal government to embrace true federalism.

Going further, the organisation urged Oyo state governor, Engineer Seyi Makinde, and the Oyo state commissioner for police to release unconditionally the three members of the Oodua Peoples Congress (OPC) that were detained on account of the alleged arson and murder charges against them by the Oyo state police command.

Also, the group expressed its total displeasure at the spate of insecurity across the country, noting that the southwest cannot continue to play a second fiddle in a country that thrives on corruption and deceits.

Also, the statement read that the group throws its weights behind the Southwest Security Network codenamed operation Amotekun.